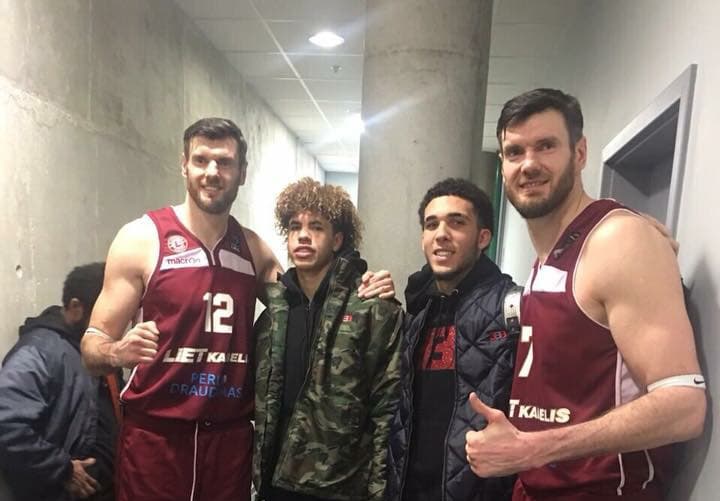 The Junior Basketball Association (JBA) coached by LaVar Ball brought the famous family back to Lithuania but this time, LaVar prefers to bypass Prienai. Yet after their defeat against Sintek – Jonava, JBA has to decide on an unexpected offer – a friendly match with Prienai-Skycop.

Coming from Denmark, JBA continues their International tour in Lithuania. Staying here for only a week, LaVar’s team is set to meet with two local clubs.

After their defeat against BC Sintek-Jonava ending 126-118, JBA is getting ready for their next game against Alytaus-Dzukija on Monday, October 1st. Their third and supposed to be final game is just few days later – October 4th, but now plans might change.

Prienai-Skycop has decided to invite JBA and Balls to revisit their town for a friendly match. Led by the tallest twins in basketball, The Lavrinovic brothers Prienai-Skycop is ready to create a dramatic duel on court against Balls whose father just recently pulled his sons out of the club.

“It’s a friendly invite. After consulting with the team, we’ve decided that this match would be amusing not only to the players themselves but also – the fans. We’ve contacted Balls back in September to invite them for a game and, since their here, it seems only natural to do it once more,” says executive of the club, Adomas Kubilius.

Back in the day “Ball In The Family” stars in Prienai have created more drama on screen than in the court. According to the head coach, Virginijus Seskus, LiAngelo and LaMello had no inner drive for the game or will to become better players, while irresponsible LaVar’s financial decisions have put the whole club at risk.